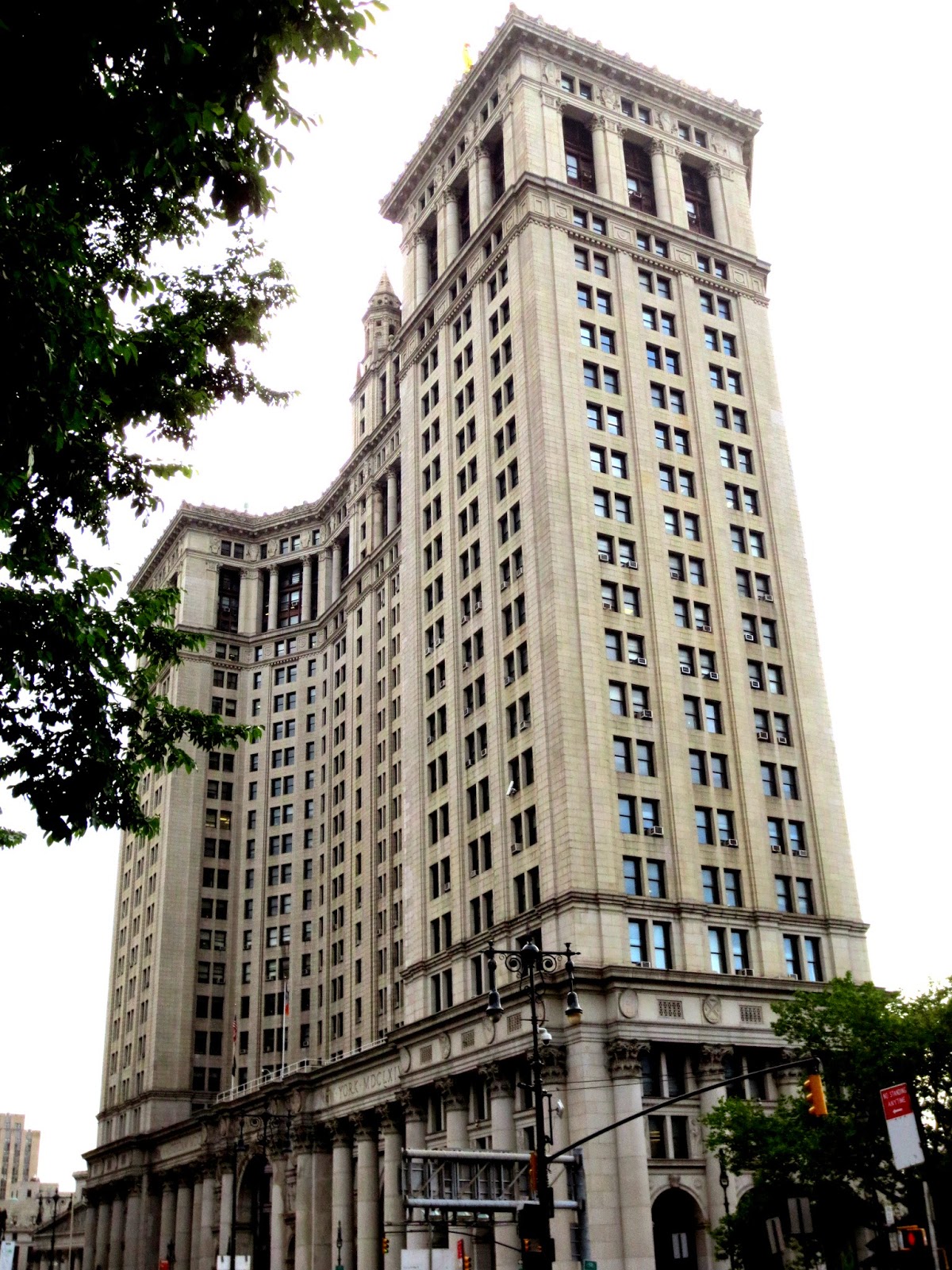 Manhattan Municipal Building, east of City Hall Park and just north of the Manhattan entrance to the Brooklyn Bridge, is among the largest government office buildings in the world and it does not have to surprise you –New York is one of the largest cities in the world.   January 1st, 1898, marks the first day in the life of the five boroughs of “Greater New York“.   A greater New York needed  additional   governmental space after the consolidation.

McKim, Mead and White  was at the time the largest architectural firm in the world,  with a staff numbering over 100. A prominent American architectural company  already designed several private clubs in New York , Washington arch at Washington Square and Brooklyn museum, but the Manhattan Municipal Building would be their first skyscraper. 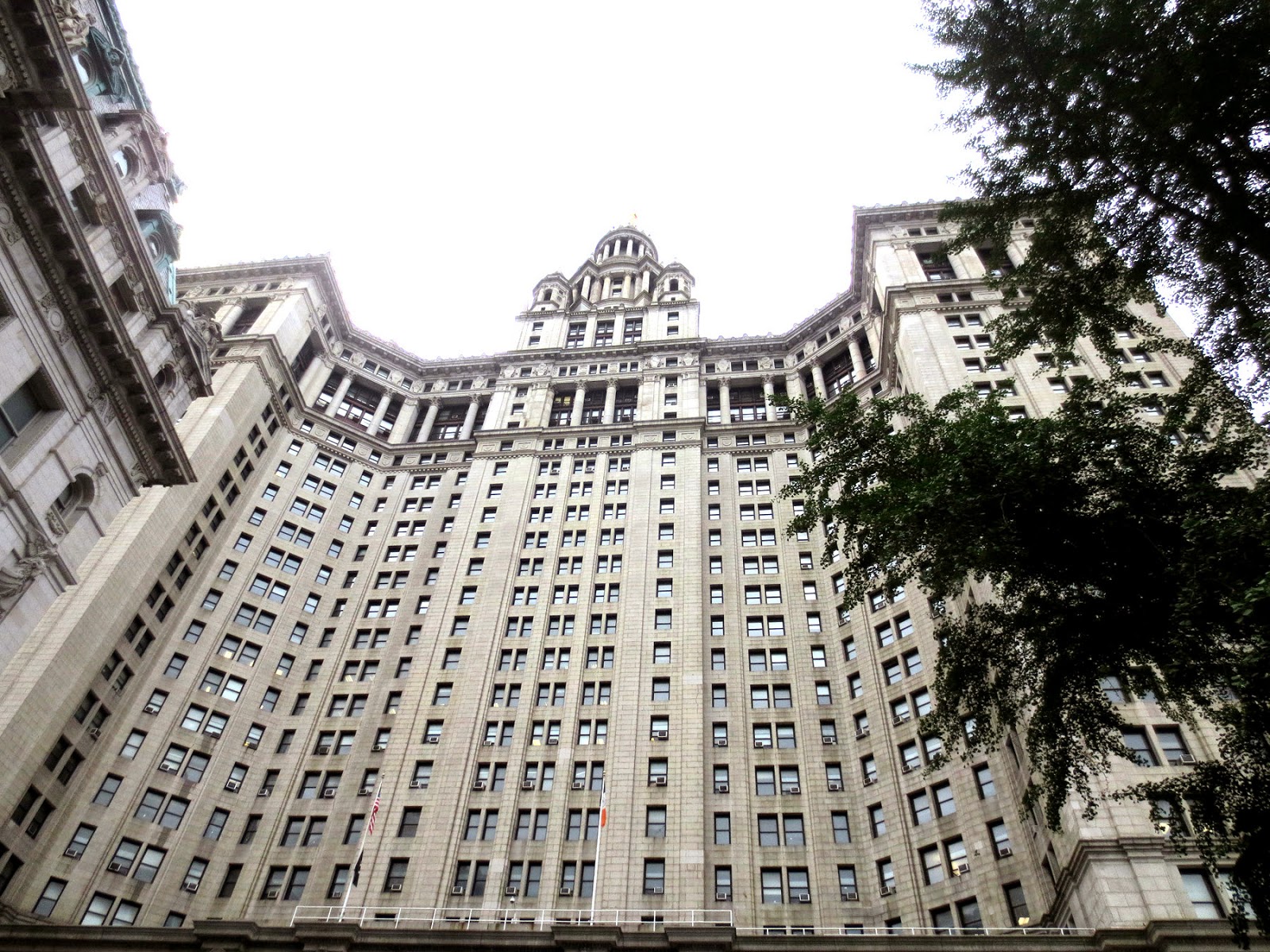 It is also the first building to incorporate a New York City Subway station into its base.  Construction began in 1907 and ended in 1914.
The limestone building incorporates Roman, Italian Renaissance and Classical styles of architecture. A major feature in the design is an open plaza, screened by Corinthian columns, that appears to be carved out of the first three stories of the structure.  The plaza flows into a central triumphal arch, inspired by the Arch of Constantine in Rome, Italy. So grand is the arch that automobile traffic flowed through it before Chambers Street traffic patterns were altered. 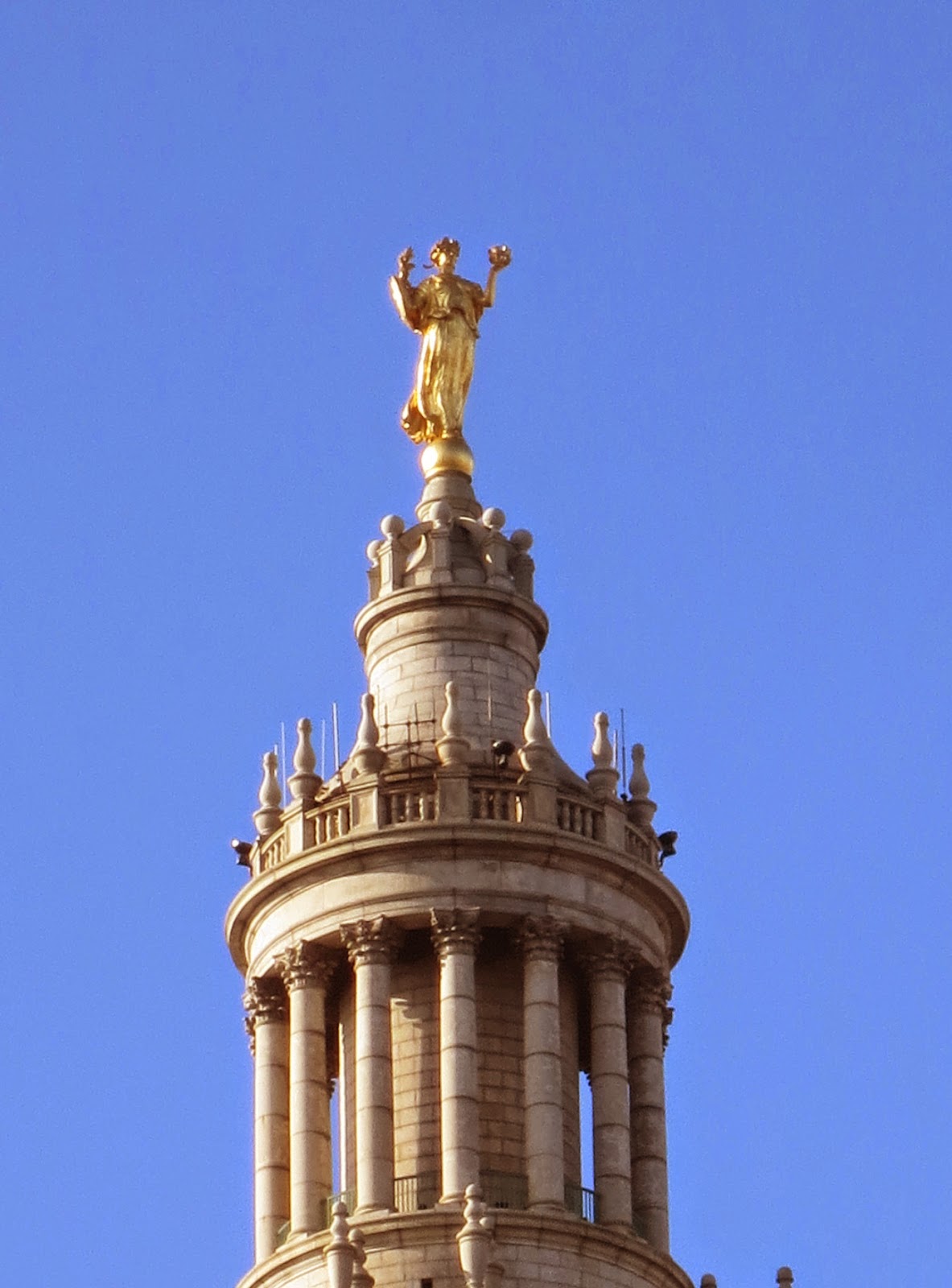 The statue of Civic Fame on top of the Municipal Building, installed in March 1913, is a gilded figure designed by Adolph A. Weinman.  In her left hand is a five-sectioned mural crown, to represent the five boroughs of New York City: Manhattan, Brooklyn, The Bronx, Queens, and Staten Island.

At 25 feet (8 m) tall, it is the third largest statue in all of Manhattan, after the Statue of Liberty and Bellerophon Taming Pegasus ,  located on the facade of Columbia Law School.

Audrey Munson, American artist's model and film actress, known variously as "Miss Manhattan "      for the figure of Civic Fame.  She was also the model for    more than a dozen other public sculptures in New York, including Pomona Statue on the top of the Pulitzer fountain  on Grand Army plaza.  You can read about Audrey Munson in one of my posts.The building's five cupolas also represent the five boroughs.  But who can see the statue and cupolas  except birds and Google map? The building is 25 stores plys fifteen additional stores in the tower.

The Municipal building     served as the one of the prototypes  for seven Stalin-era skyscrapers(visotki) , known as Seven Sisters.

The first skyscraper was completed in 1949, and all seven were completed within 10 years.  These buildings became: Moscow State University on Sparrow Hills; two government buildings, including the Ministry of Foreign Affairs; two residential buildings; and two hotels, the Ukraina and the Leningrad. The actual construction of the Sisters was carried out by thousands of prisoners from the Gulag, as well as German prisoners of war.
The Seven Sisters were the first large-scale construction in Europe after the war, and the first to bring skyscrapers to Europe.   Some 2.6 billion Soviet roubles were spent on Moscow State University alone – which has beautiful marble staircases and was the tallest building in Europe until the exhibition center at Frankfurt-on-Main was completed in 1990.

By  1950s America was already building very different high-rises of modern materials such as concrete and glass – Lever house, the first first fully climate-controlled building in New York was built in 1952 and Seagram building in 1958.

The Municipal Building has also earned fame as the place where approximately 30,000 New Yorkers are married each year in civil ceremonies that last about 4 minutes.