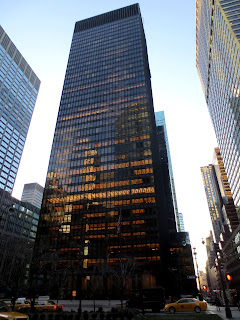 Seagram is the skyscraper (38 stories ) located at 375 Park Avenue, between 52nd Street and 53rd (Find on  the map!).Hard to believe but this sleek and modern building  is more than 50 years old. It  was built in 1958 as the headquarters for the Canadian Seagram Company that was  the largest distiller of alcoholic beverages in the world at this time.

The company enjoyed a quick growth in  1920s due to Prohibition in the United States. By 1985 the company was the largest single shareholder  of DuPont. in 1995 the  owner of the company got into the film and electronic media business but run it poorly. In 2002   Coca-Cola Company acquired the line of Seagram's soft drinks. Seagram Museum  located in the old building of  the Seagram distillery in Waterloo, was forced to close due to lack of funds. 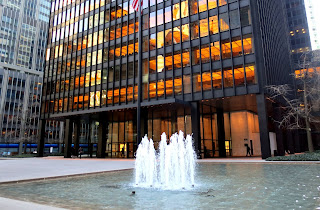 The Seagram building was designed by Ludwig Mies van derRohe and is often considered to be  highpoint of the modernist  architecture of  high risers.  Mies is  associated with his quotation of the aphorisms, "less is more" and "God is in the details". The sculptor was born in 1886 in Germany.  He joined the German avant-garde and adopted  the aesthetic credos of Russian Constructivism with their ideology of "efficient" sculptural assembly of modern industrial materials. Mies served as construction manager of the Embassy of the German Empire in Saint Petersburg, Russia. 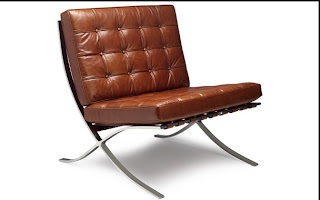 Mies designed The Barcelona Pavilion  - the German Pavilion for the 1929 InternationalExposition in Barcelona, Spain. This building was used for the official opening of the German section of the exhibition. Barcelona chair was designed by Mies for the Spanish Royalty to oversee the opening ceremonies of the exhibition. Ludwig Mies van der Rohe's signature is stamped into each chair. The char is very expensive. Unauthorized reproductions  are sold under different marketing names.

Nazis rejected his style as not "German" in character and  Mies left his homeland in 1937. In 1944 he became an American citizen and worked from his studio in downtown Chicago for his entire 31-year period in America. In 1958  Mies van der Rohe designed what is often considered to be  highpoint of the modernist architecture of  high riser, the Seagram Building in New York City. Mies was chosen by the daughter of the client, Phyllis Bronfman Lambert. 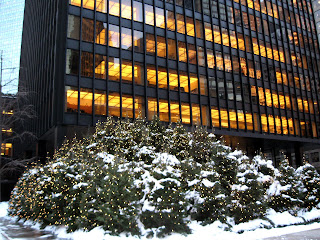 Mies would have preferred the steel frame to be visible to all; however, American building codes required that all structural steel be covered in a fireproof material. And Mies who does not want to hide the structure used non-structural bronze-toned beams that are visible from the outside of the building. As designed, the building used 1,500 tons of bronze in its construction. Seagram was the world's first office tower to feature floor-to-ceiling height glazing and was the world's most expensive skyscraper at the time. 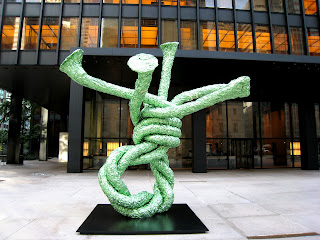 The building  occupies only 40 percent of the allowable zoning space. There is a granite-paved public plaza in front of the building with two shallow reflecting pools with fountains on both sides. Sometimes in summers the plaza is used as a sculpture garden. In winter the pools are closed and a lot of potted Christmas trees covered with lights  add a holiday spirit to the plaza.

Another interesting feature of this building are built in blinds which only operated in three positions – fully open, halfway open/closed, or fully closed. The Architect does not want to add a disorder to the façade. Using the Seagram as a prototype, Mies' office designed a number of modern high-rise office towers but Seagram building is the only one by Mies in New York. The building was designated  an architectural  landmark in 1989.