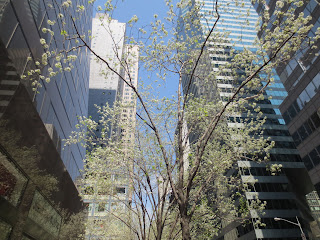 The thing I love about living in New York is that the weather changes never  seem to get old. It was almost 80º F yesterday and today it is again 45º F! But the spring is here and I know it looking on the gorgeous pear trees on Madison and Park Avenue. The Callery pear is the second most common street tree in Manhattan and it is the first to bloom in spring.


Callery pear was imported  from China  in 1909 and  was widely planted as a rootstock for common pear long before it gained interest as an ornamental. Around 1950, the ornamental value and hardiness of Callery pear were recognized, leading to the development of a number of cultivars, including ‘Bradford'.  The fruits of the Callery pear are small, and hard  almost woody.
Since the early 1960s, cultivars of Callery Pear have been planted extensively in the New York area. The tree is fast growing and is tolerant of pollution and other extreme conditions.
Posted by Секреты Большого Яблока