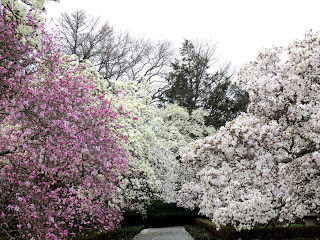 The sweet scent and showy blossoms of magnolias are among the early signs of spring in New York. These elegant, graceful, and beautiful trees bloom in an array of pastel colors usually starting from the end of March.  But this year the spring is late...

One of the best places to see magnolias is Brooklyn Botanic Garden where Magnolia plaza is sweetly scented with the perfume of more than 70 trees.   Magnolia is native to the southeastern United States. It is a very popular ornamental tree, grown for its attractive shiny green leaves and fragrant flowers.

It is also grown in Central and South America as well as parts of Asia. This tree was unknown in Europe until the beginning of the 18 century when the plant collector Mark Catesby wrote, illustrated and published the fullest and most handsome graphic description of the flora and fauna of eighteenth-century colonial America. He brought Magnolia to Britain in 1726. It had also come to France, the French having collected it in the vicinity of the Mississippi River in Louisiana. 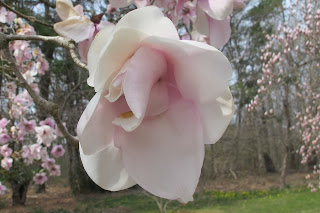 Magnolias are so ancient that they are pollinated by beetles - because bees had not yet evolved when the magnolias first appeared between 36 and 58 million years ago. Magnolias have uniquely complex flowers, a sign of their ancient origins.


New York City spans two different climate zones. Flowering in Brooklyn usually commences from one to two weeks before it does in the Bronx - so if you miss it in Brooklyn Botanic Garden you still have a chance to see the show.
Posted by Секреты Большого Яблока