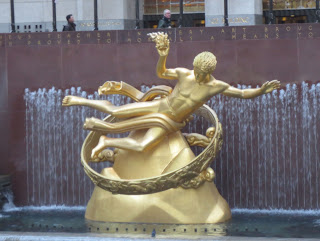 The Prometheus Statue at Rockefeller Center in New York City is one of the most famous sculptures in the world. After the Statue of Liberty, it is perhaps the most celebrated piece of artwork in America.

Prometheus was the wisest Titan. His name means "forethought" and he was able to foretell the future. Prometheus is known as the protector and benefactor of man. He gave mankind a number of gifts including fire.

For this Zeus punished Prometheus by having him chained to a rock with an eagle tearing at his liver. He was to be left there for all eternity or until he agreed to disclose to Zeus which of Zeus children would try to replace him. He was eventually rescued by Hercules without giving in to Zeus. ﻿﻿
﻿﻿﻿﻿﻿﻿﻿﻿﻿﻿﻿﻿     In the Western classical tradition, Prometheus became a figure who represented human striving, particularly the quest for scientific knowledge.

Prometheus has become a famous archetype and symbol in world literature, music, and art for his defiance of established authority and for the suffering he endured.
Through the ages, writers and composers have referred to the Titan to draw attention to a fictional or real person's suffering or his rebellion against a government, a way of life, a tradition, or an accepted practice or principle.

Examples of such references are  Mary Shelley's 1818 novel, Frankenstein or Alexander Scriabin's 1910 symphonic work, Prometheus, the Poem of Fire  and André Maurois's 1965 biography, Prometheus, the Life of Balzac.

﻿      Cast in bronze from the original model of the Prometheus Statue at Rockefeller Center, this Prometheus sculpture is gilded by hand in 24K gold leaf, and bears the sculptor's signature, P. Manship. To date, only four Prometheus maquettes exist, two in private collections, one in the Smithsonian Institute and one in the Minnesota Museum of Art.


Paul Manship received the commission in January 1933 from John D. Rockefeller after presenting the Prometheus maquette to the Rockefeller Center Committee. It was part of the original design for the ambitious and quintessential Art Deco urban center built in the depths of the Depression.

Paul Howard Manship was born in Minnesota, in 1885.  Later in his life   he migrated to New York City where he enrolled in the Art Students League of New York.
In 1909, he entered the competition for, and won, the highly sought-after Prix de Rome. In Italy he attended the American Academy from 1909 until 1912. While in Europe he became increasingly interested in Archaic art and he became more and more attracted to classical subjects.

Manship was chosen by the American Battle Monuments Commission to create monuments following both the First and Second World Wars. They are located respectively in the American Cemetery at Thiaucourt, France in 1926, and in the military cemetery at Anzio, Italy.

The model for the Prometheus was Ray Van Cleef, widely used artists’ model. He was  a central figure in the iron game from the 1930s, managing editor of Strength & Health magazine and  a gym owner.