The Cathedral of St. John the Divine, the largest Gothic cathedral in the world. Part 2 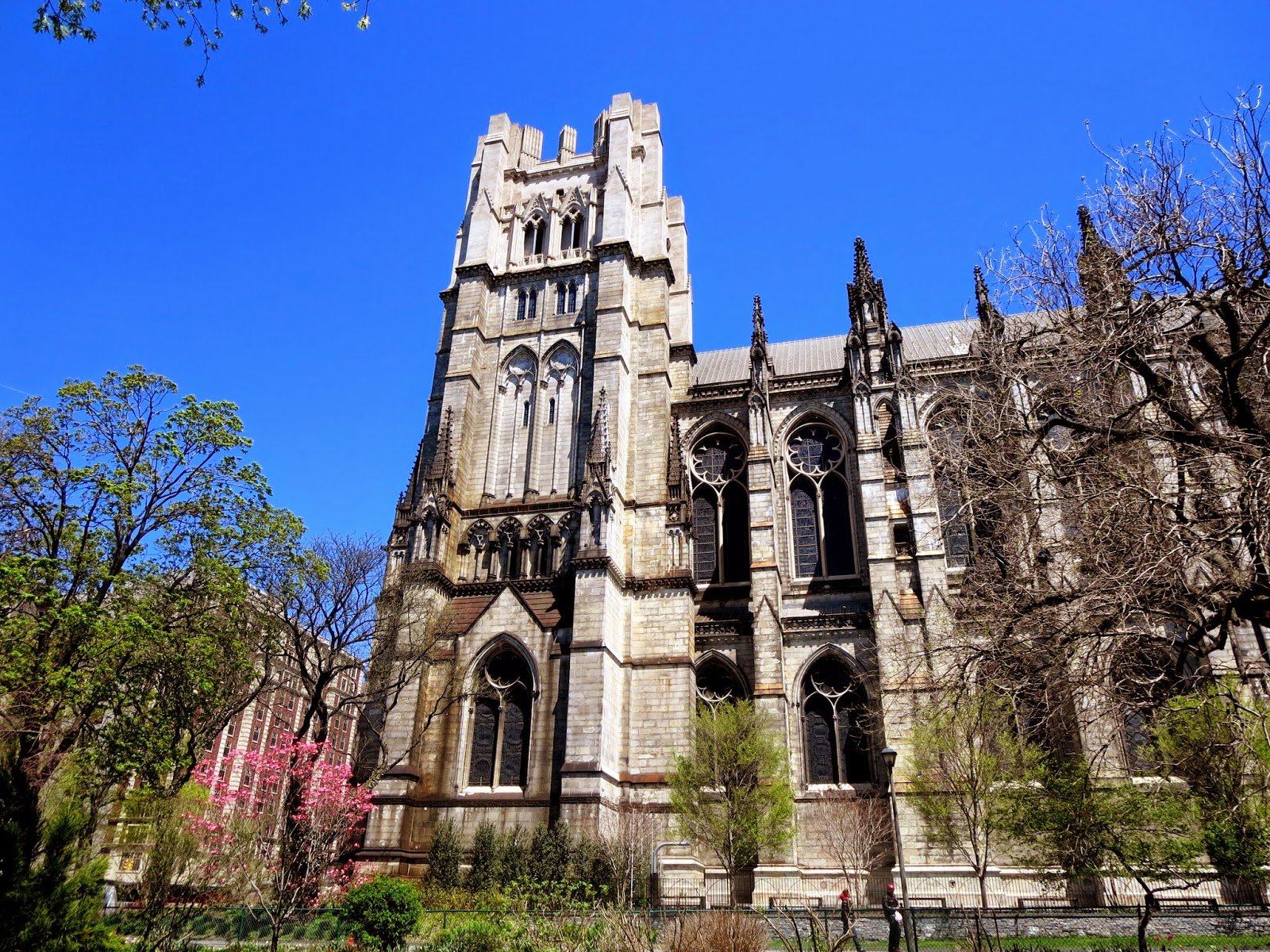 The Bishop of New York has his seat at the magnificent Gothic and Romanesque Cathedral of St. John the Divine, which was erected in the early part of the 20th century at the highest point in Manhattan. You can find the beginning of the story in my previous post.
The Cathedral was opened end-to-end for the first time on November 30, 1941, a week before the bombing of Pearl Harbor. 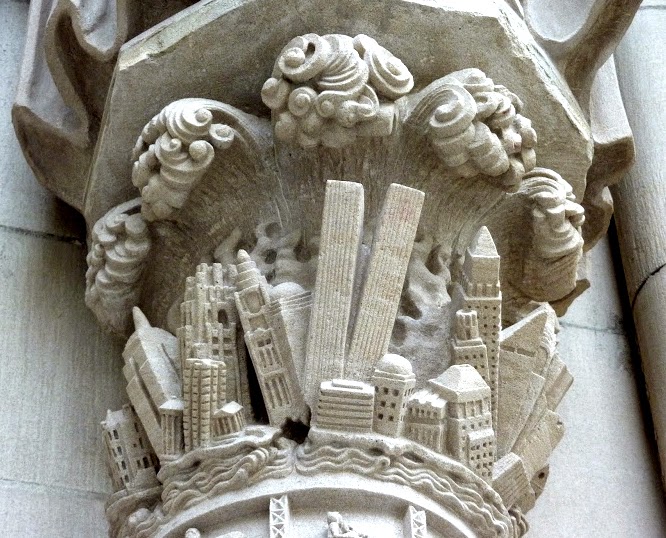 On the western facade of the building, stonemasons have sculpted numerous scenes that seem oddly out of place for a Cathedral. The most striking one is the chilling depiction of the destruction of New York city and its landmarks.  The scene above was done in 1997, four years before the destruction of the Twin Towers.  Other recognizable skyscrapers are the Chrysler Building and the Citigroup center. 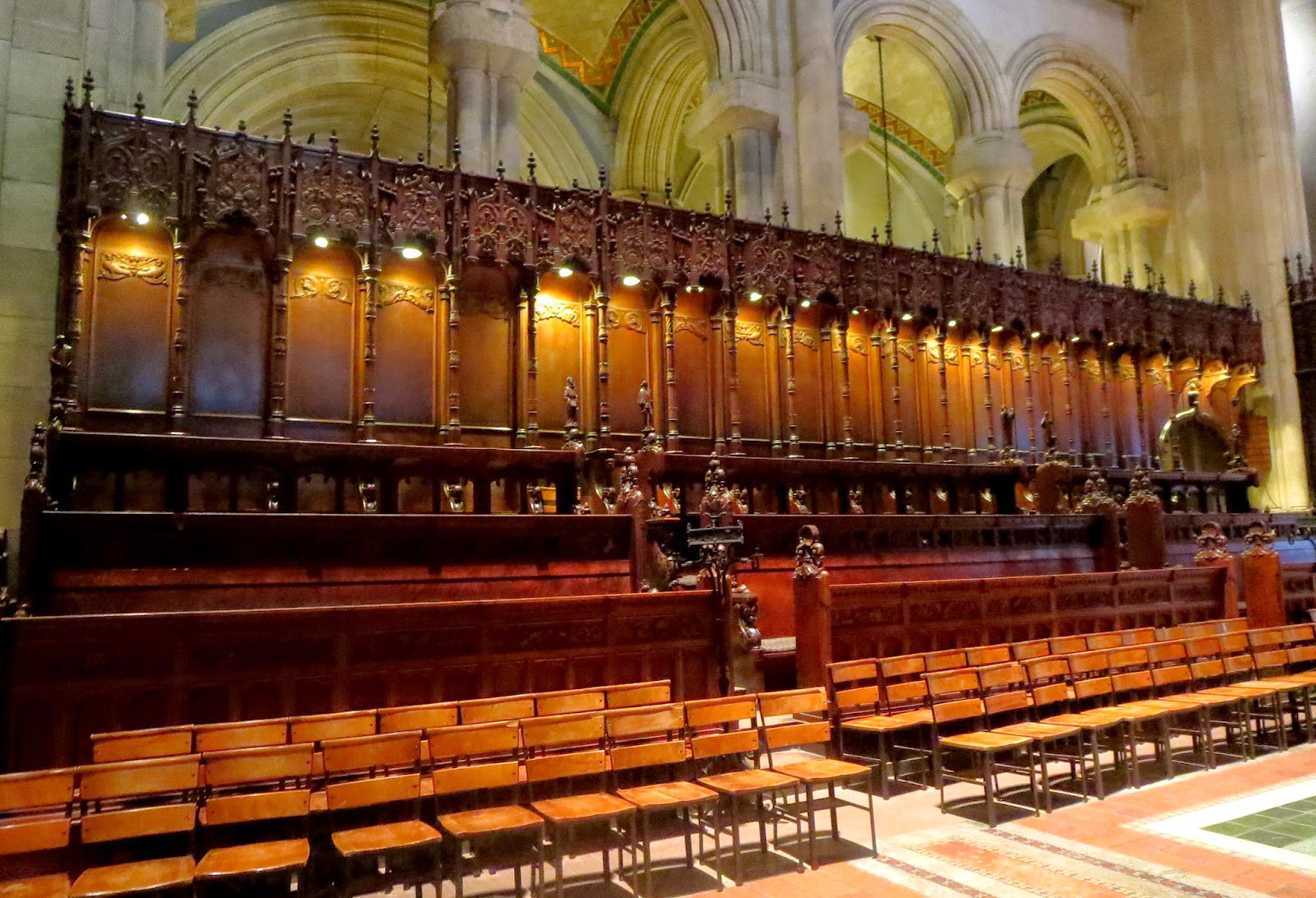 The 15th-century German choir stalls separating the narthex from the nave are on permanent loan from The Metropolitan Museum of Art.

There are Seven chapels,  known as the "Chapels of the Tongues radiate from the ambulatory behind the choir.  Each Chapel  is dedicated to one of the New York nationalities or ethnic groups who worked on the cathedral .
The 3-ton bronze doors below this portal are decorated with relief castings of scenes from the Old Testament on the left and the New Testament on the right. The doors are opened only twice a year: on Easter and in October for the Feast of St. Francis. 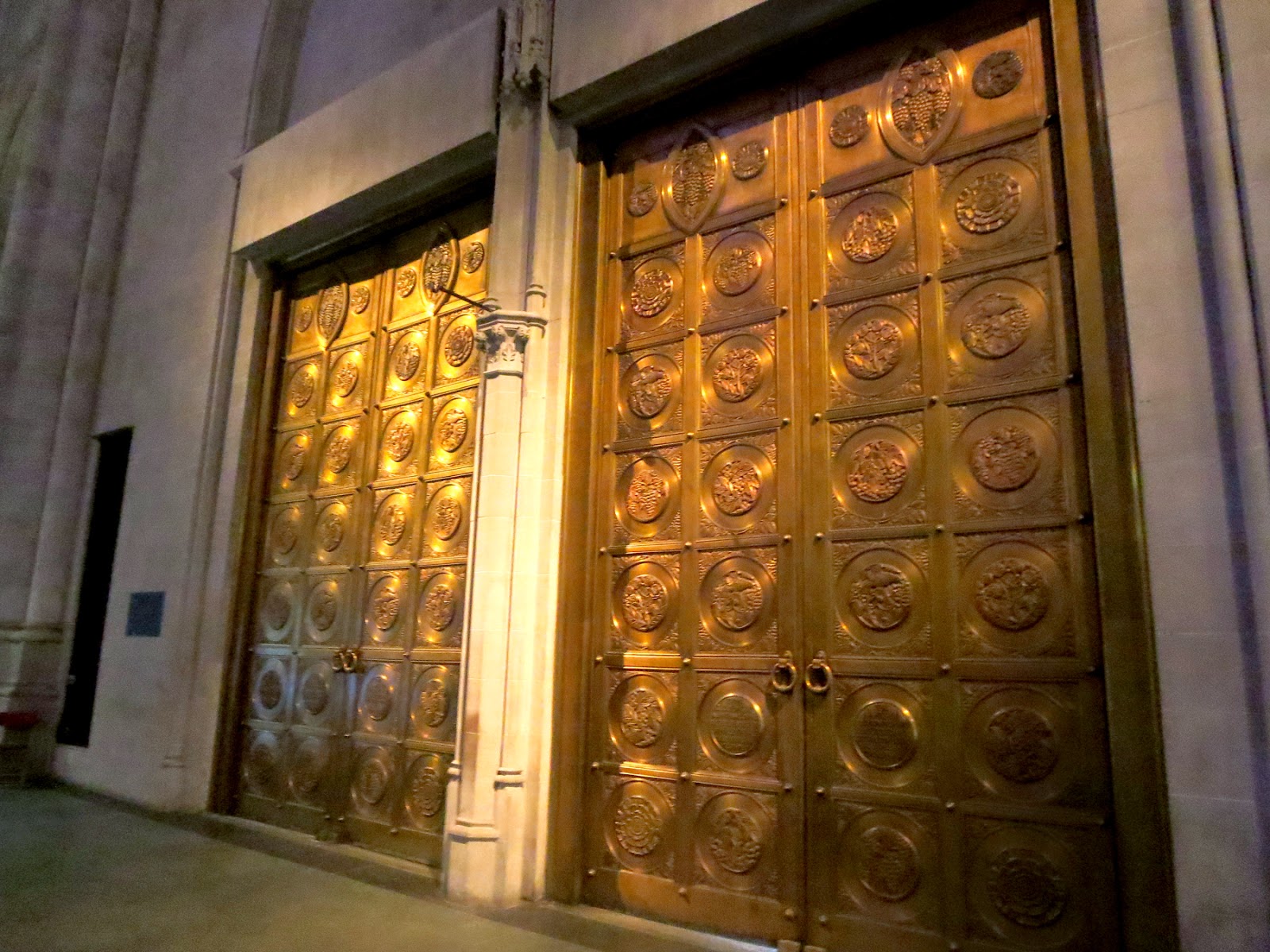 At forty feet in diameter, Installed in 1932,  the Rose window High above the doors, is  the third largest rose window in the world and is made of over ten thousand pieces of glass.
According the tradition the Episcopal cathedral is oriented toward the East, facing the sunrise, which fills the southern windows with more bright light than those on the north side . If you take binoculars and look at the northern side stained glass window, installed in 1924 after the Paris Olympics , you can find   guys bowling and auto-racing, playing football, golf, basketball, baseball, and dozens of other sports. 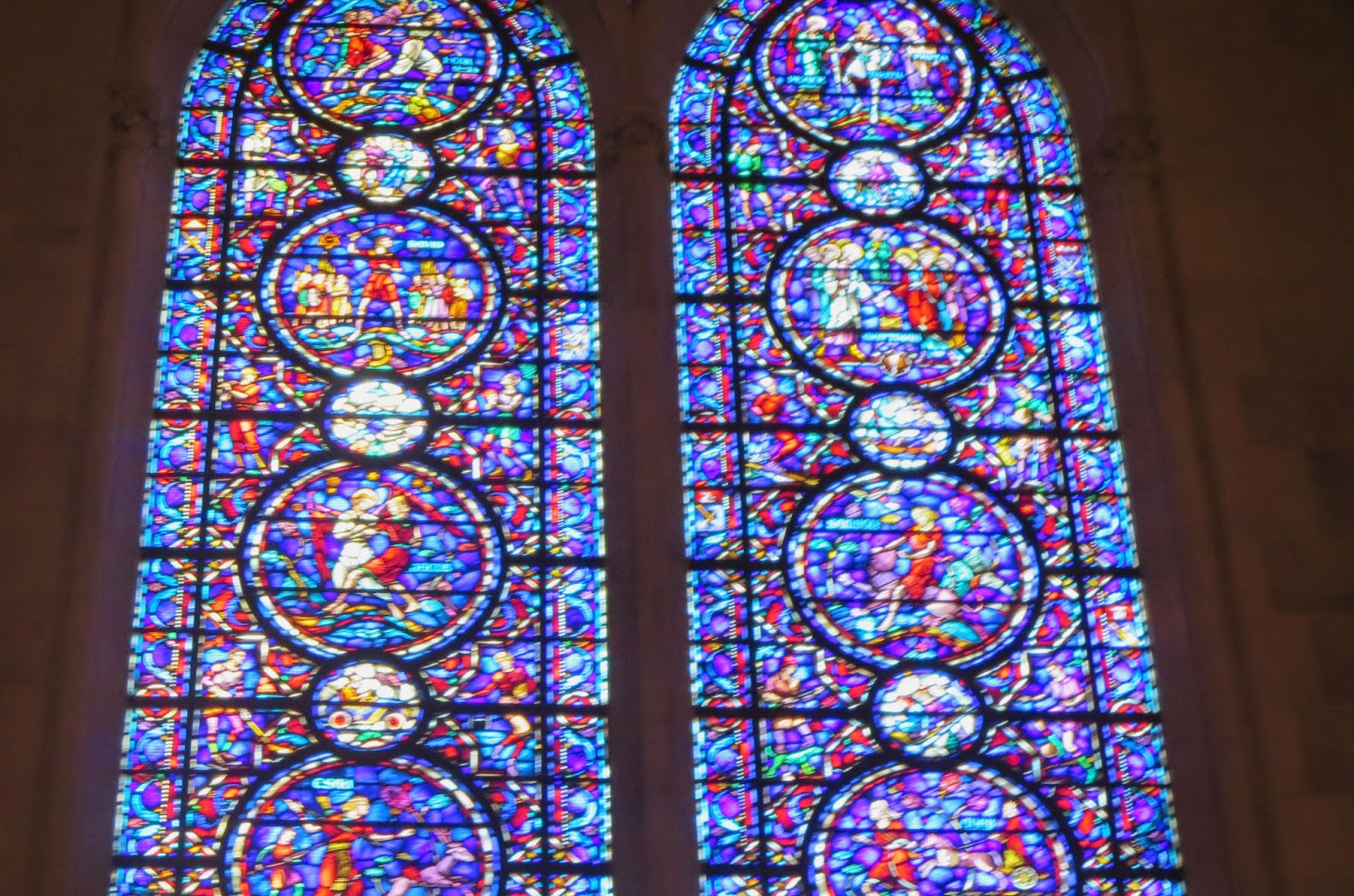 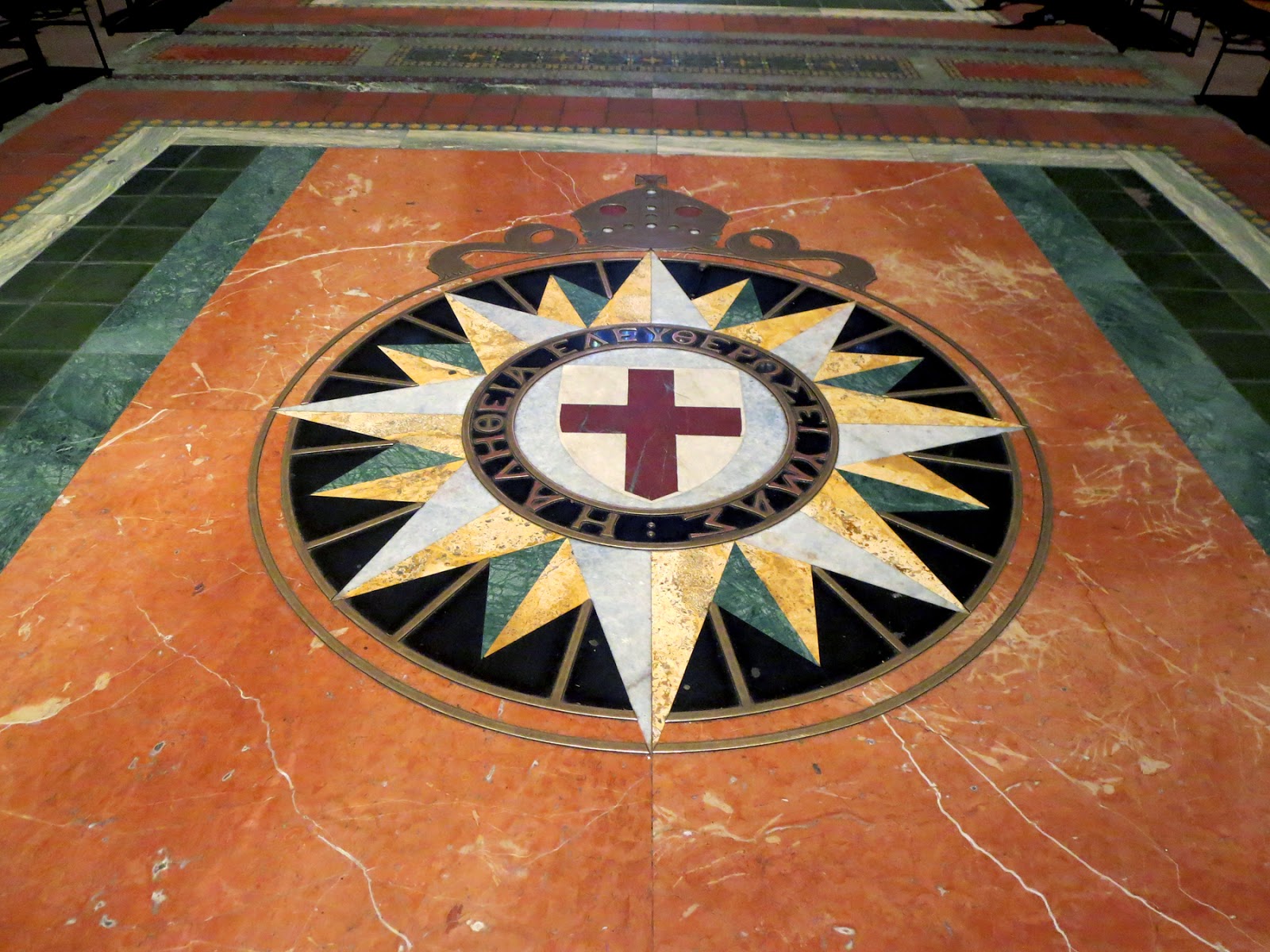 On the pavement of the Choir is the Compass Rose, the official emblem of the Worldwide Anglican Communion. The text surrounding the central cross is in Greek, and translates as: “The truth will set you free.”

The cathedral houses one of the nation's premiere textile conservation laboratories to conserve the cathedral's textiles, including the Barberini tapestries to cartoons by Raphael. 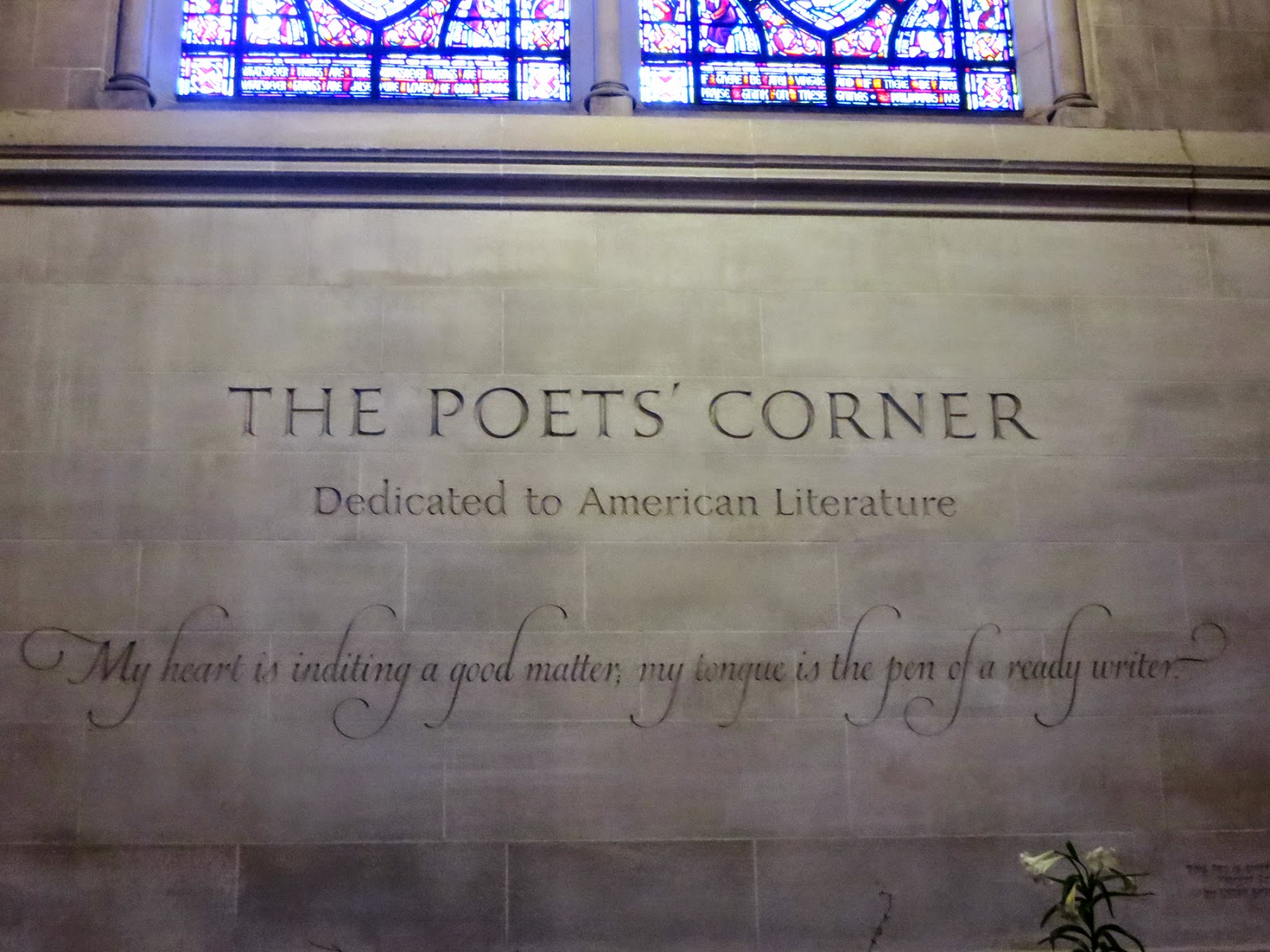 The Cathedral's Poets Corner, created in 1984 to memorialize American writers, is modeled on the Poets’ Corner at Westminster Abbey.      At a dedication service  two giants of 19th-century American literature, Herman Melville and Edgar Allan Poe, had their names inscribed in stone. There are two poets in common: T. S. Eliot, an American who became a British citizen, and W. H. Auden, an Englishman who took American citizenship

Brodsky's memorial service surprised some people.  Tchaikovsky's Winter Dreams were  playing at the background, and no words  were spoken about Poet. There were only   poems :    first in English  ( ``Letters From the Ming Dynasty,'' and ``Roman Elegy XII,'’ and after it in Russian: ``The Dominicans,'' ``Lagoon,'' ``The Hawk's Cry in Autumn,'' and, inevitably, ``In Memoriam.''

There's a beautiful 9/11 memorial by  New Yorker sculptor Meredith Bergmann to the right side of the main entrance. 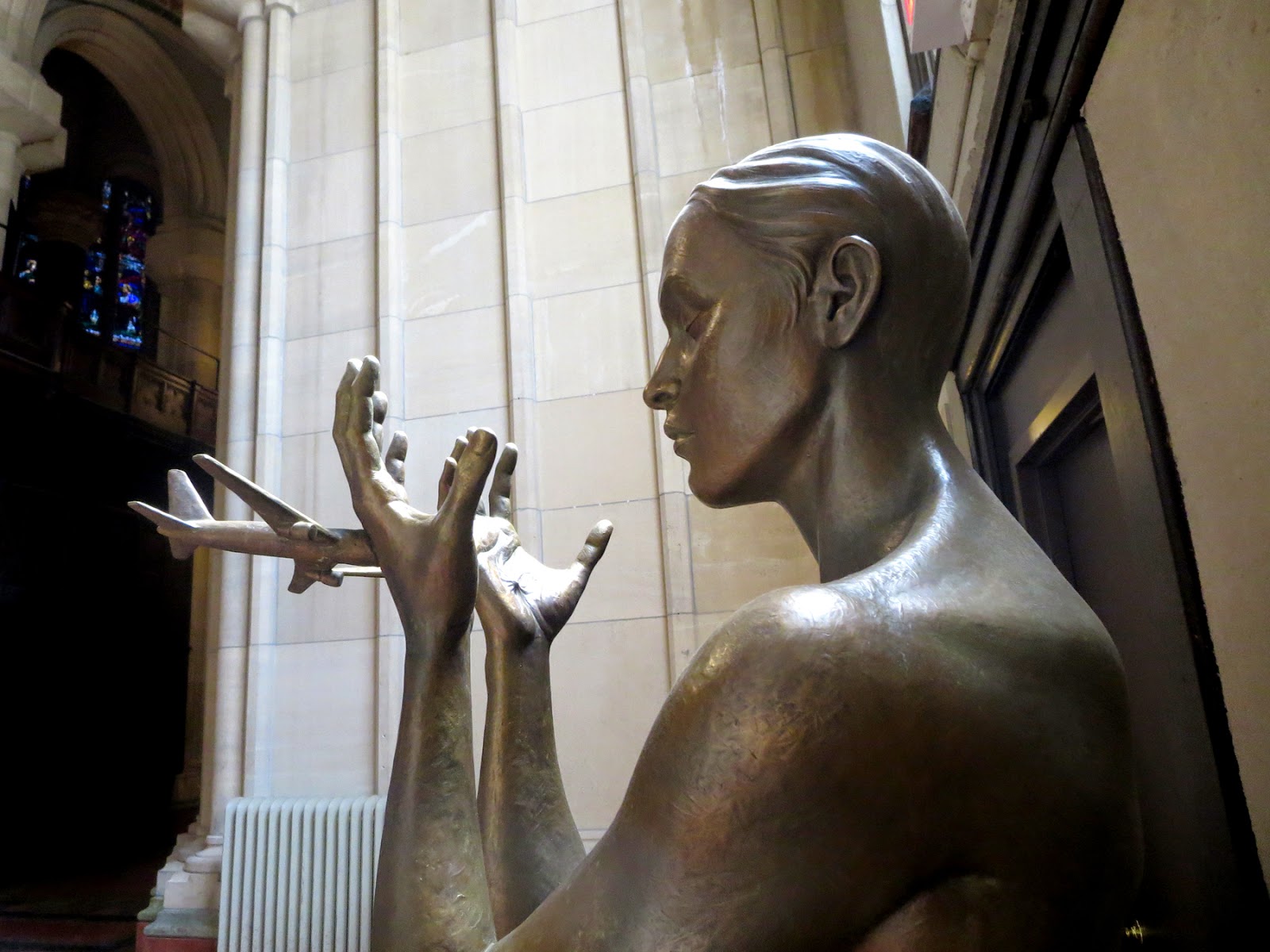 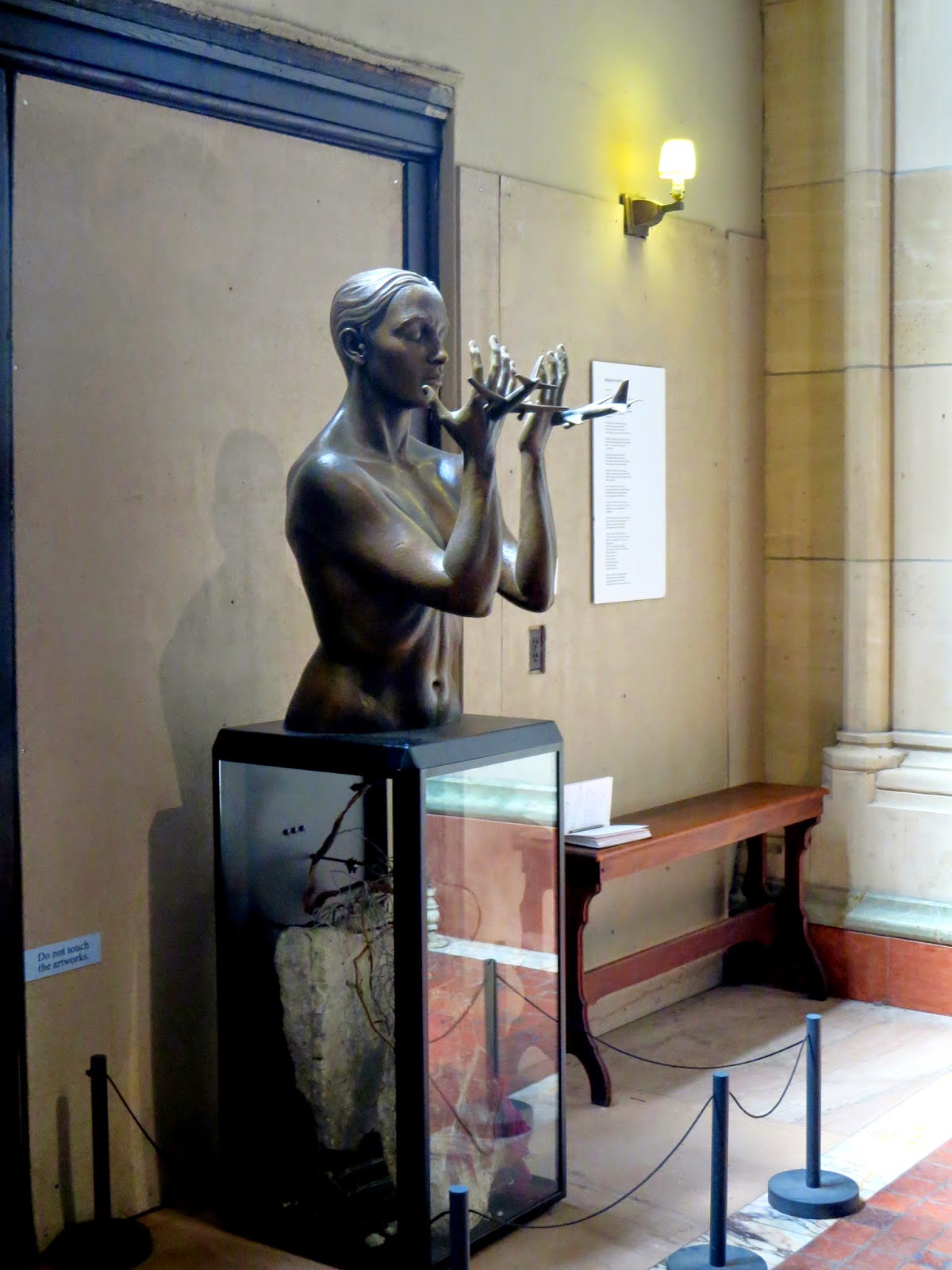 The artist said:" I felt defiantly determined to make as non-Taliban a sculpture as possible: first of all, a nude woman from the tradition of the allegorical female nude, representing New York City as young and strong and alert."


The sculpture is  permanently installed in the Church of St. John the Divine, on a pedestal with glass sides that   holds fragments of the Twin Towers.

The Cathedral campus boasts six organs.The Great Organ, one of the most powerful organs in the world, was originally installed in 1911 and then enlarged and rebuilt in 1952. The 2001 fire damaged the instrument, but   a  five-year restoration brought it back.   All 8,500 organ pipes were taken out and shipped to Missouri for cleaning.  On Mondays at 1 pm cathedral organists provide a 30-minute break for mind, body and spirit.

Saint John the Divine is one of the few places left in New York City that allows visitors to access to its roof and a unique vista of the City.  You have to climb more than 124 feet through spiral staircases to get to the top of the church.  Vertical Tour is one hour long and is offered on Wednesday, at 12PM.


Every year in June there is   AnnualSummer Solstice Concert. This year it will be on Saturday, June 21 and will start  at 4:30 in the early morning.  The audience will be seated in concentric circles under the great dome, surrounded by the musicians and instruments, including  nine huge Balinese Gamelan gongs, and other large percussion instruments.