The Cathedral of St. John the Divine, the largest Gothic cathedral in the world. Part 1 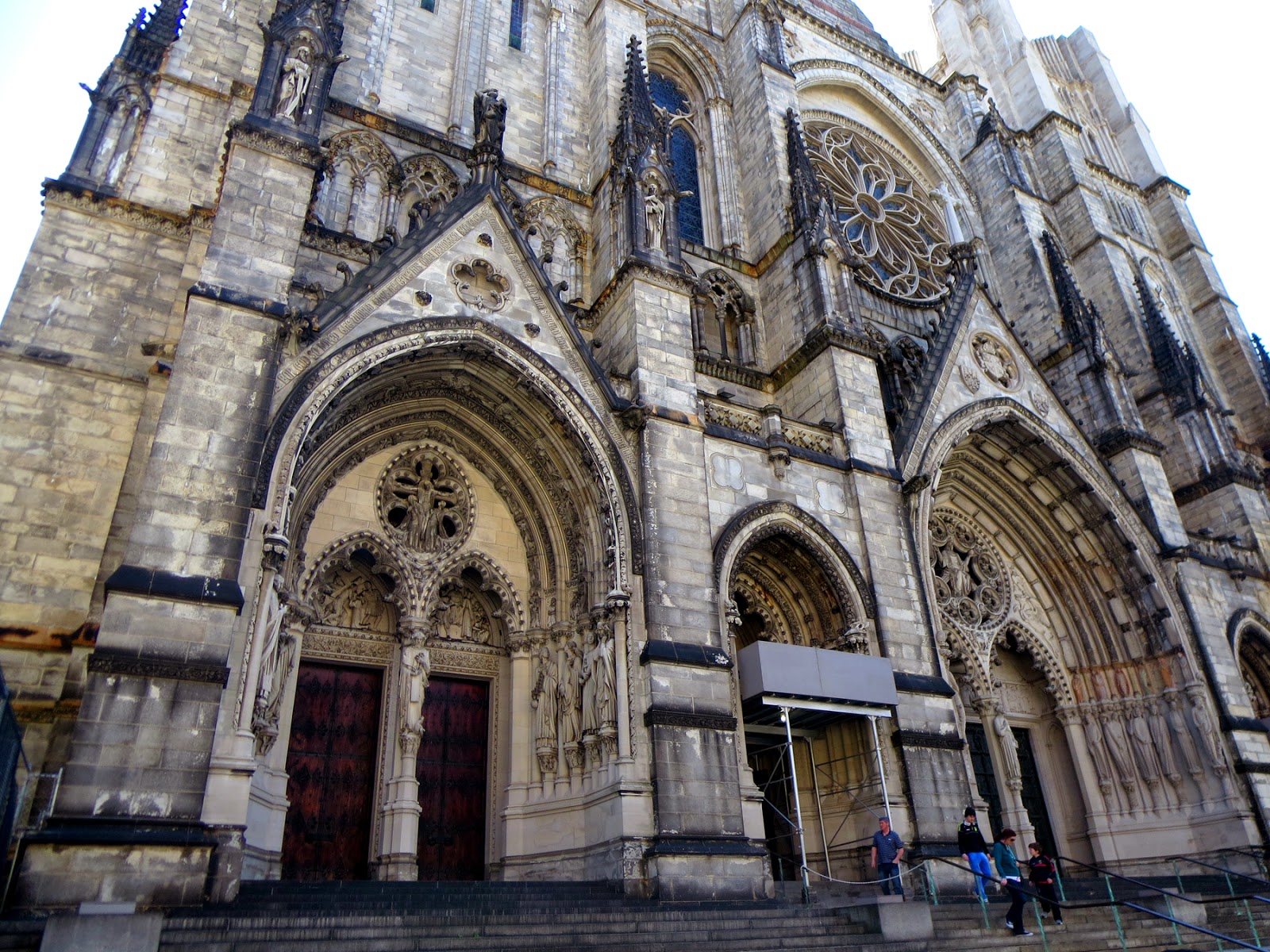 The Cathedral Church of St. John the Divine, located  on the upper West Side, is  the largest Gothic cathedral in the world.   Though it's still not finished, it's nevertheless one of New York's most impressive sights.
A Guide to the Cathedral from 1921 posited that it might take 700 years for the Cathedral to be completed, since it was employing true Gothic building methods - blocks of granite and limestone are carved out by master masons and their apprentices.
The incompleteness of the church reminded me Sagrada Familia, the monumental Barcelona, Spain  church by  Spanish architect Antoni Gaudi.  When  Antoni Gaudi died the church was   less than a quarter complete. Construction began in 1882, and it still continues today. 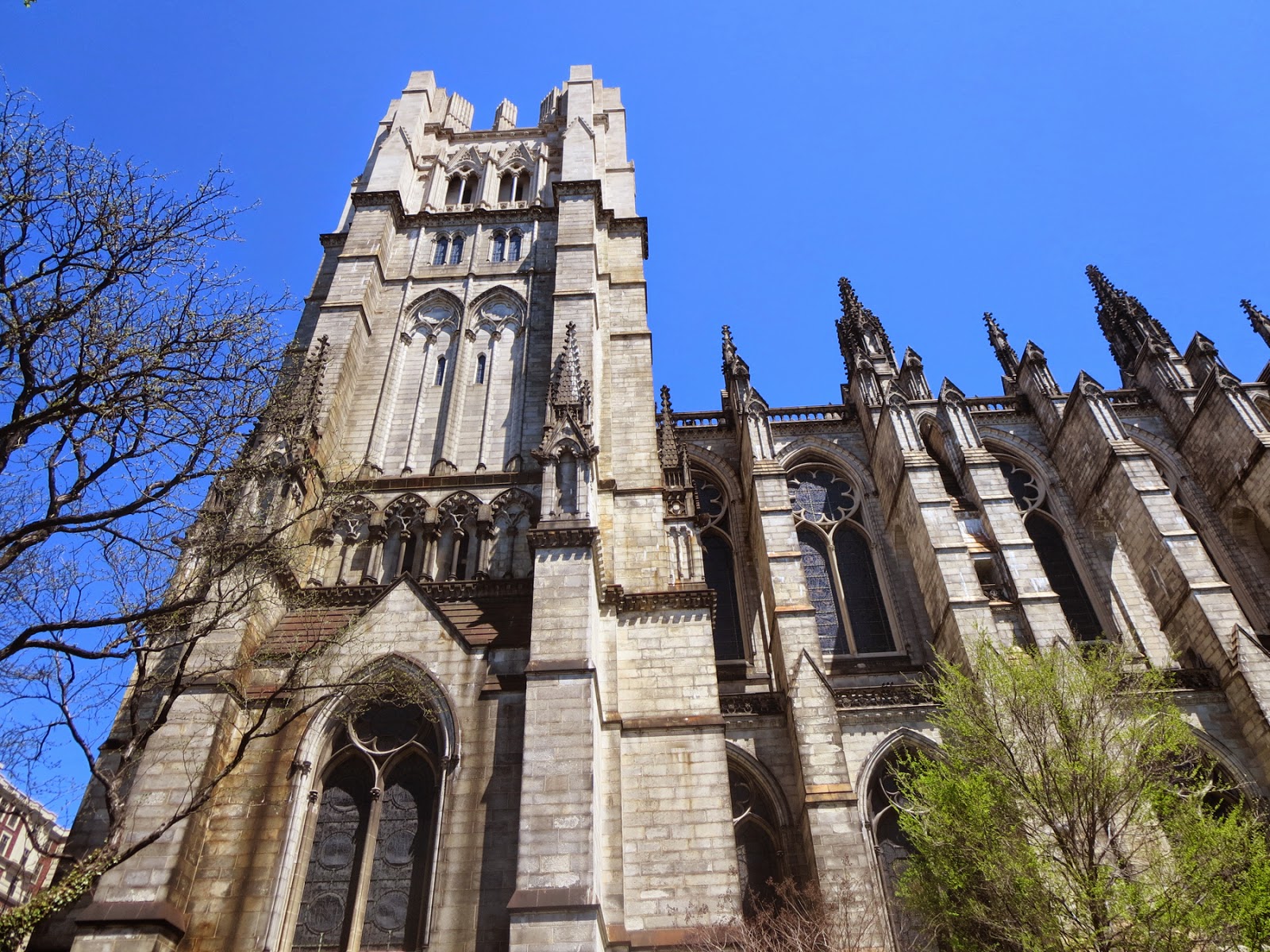 In New York it is a different story. According to the Church’s website, a frequently asked question is “When will the Cathedral be finished?” The Cathedral’s response — “Although no new construction is planned for the immediate future, efforts have been underway to preserve the Cathedral and its auxiliary buildings for the enjoyment of New Yorkers and visitors from around the world for the centuries to come.”   That’s why St. John the Divine is also known by its popular nickname, Saint John the Unfinished . 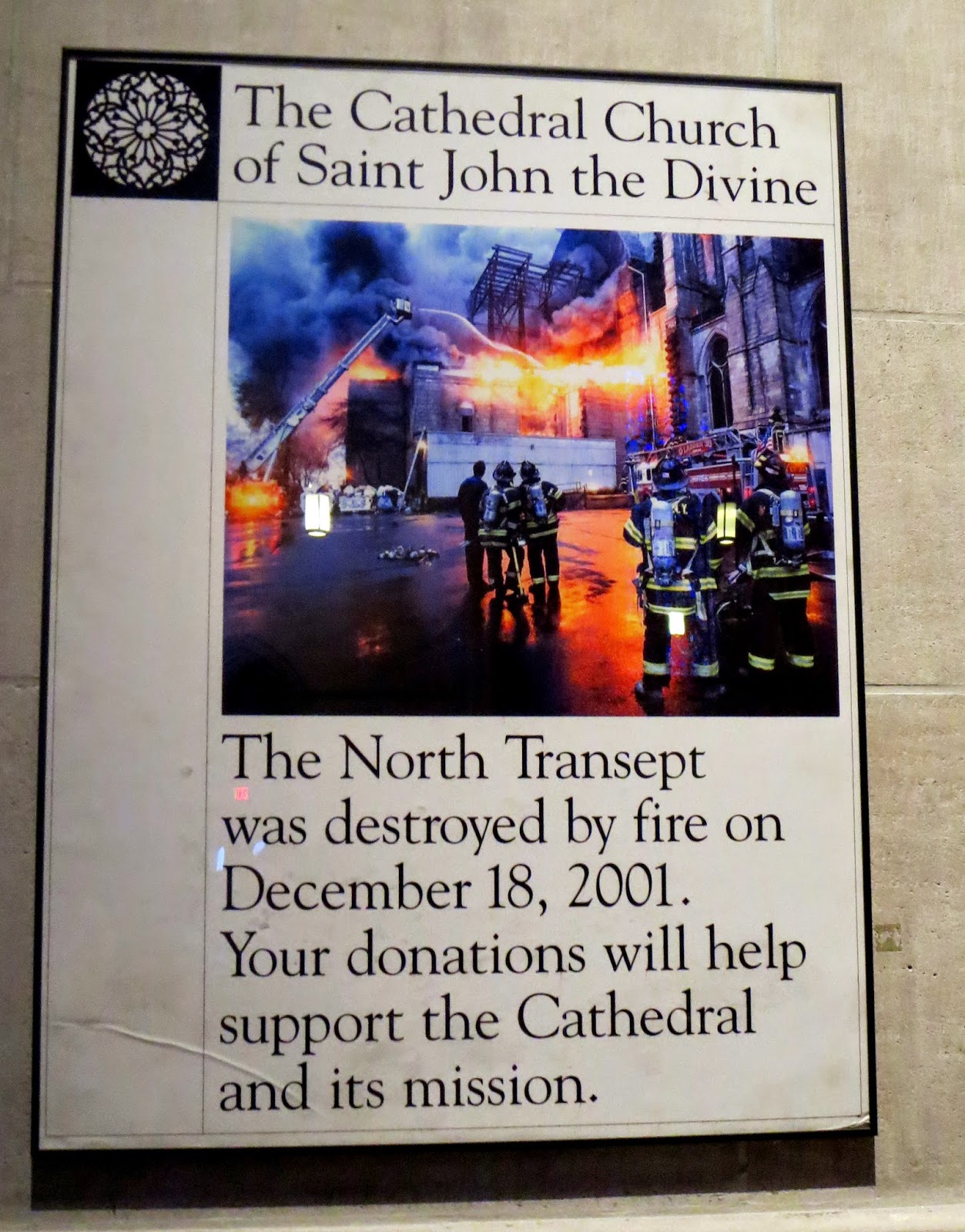 The first stone  for the Cathedral  was laid in 1892, and construction continued steadily until 1941, when the attack on Pearl Harbor stalled progress for nearly 40 years. It was a big fire in 2001 and  it took more than seven years for the crew to clean smoke damage.

Cathedral stretches the length of two football fields, while the height of the domed crossing can accommodate Lady Liberty (without her platform). Measured by length or internal volume, it is one of the five largest church buildings in the world.   The tall, pointed Byzantine-inspired arches are the most striking feature of the interior, so vast it can comfortably fit 4,500 people  during services. 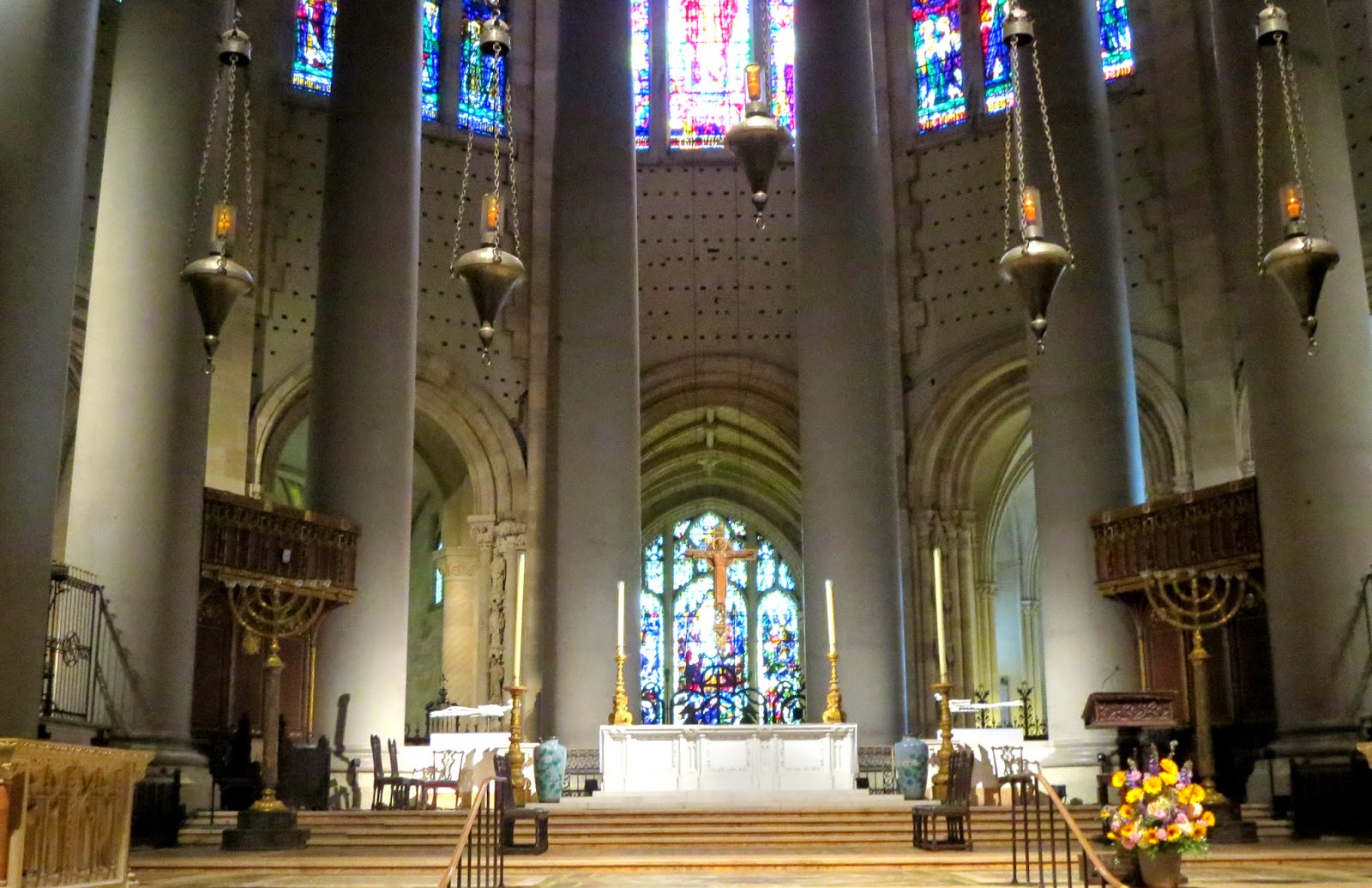 The first services in the Cathedral were held in the crypt, under the crossing in 1899.The Ardolino brothers from Torre di Nocelli, Italy, did much of the stone carving work on the statues designed by the English sculptor John Angel.  After the large central dome was completed in 1909, the original Byzantine-Romanesque design was changed to a Gothic design.In 1911, the choir and the crossing were opened, and the foundation for Cram's nave began to be excavated in 1916. 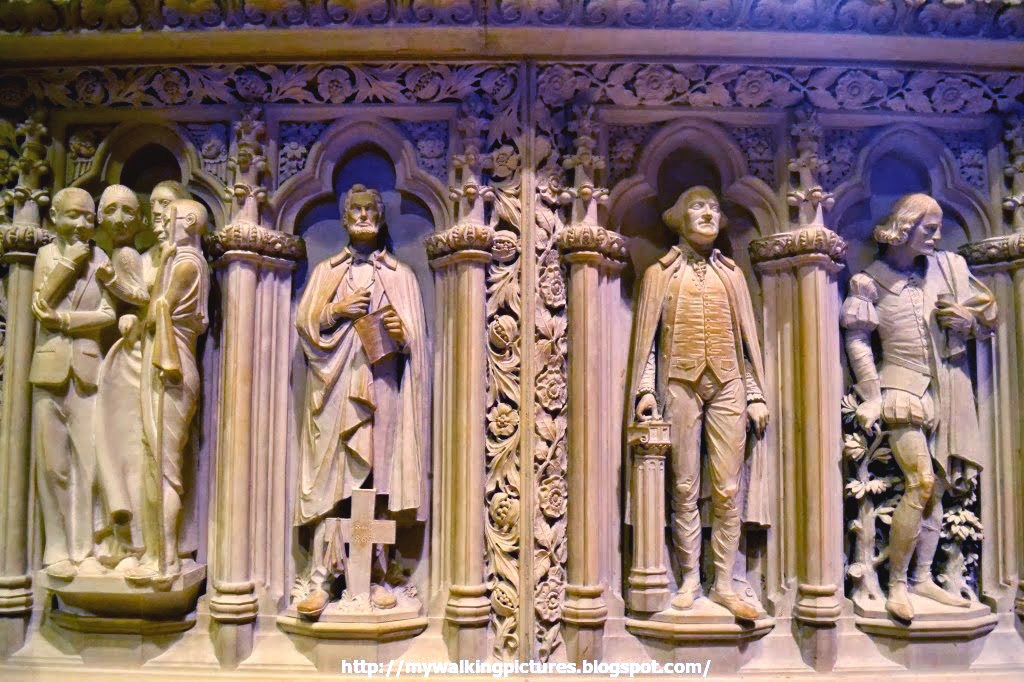 In 1922  the Cathedral installed a stone parapet.  The parapet contained “one sculpture for each of the Christian centuries, each figure being that of the personage who in that 100 years did the most, in the opinion of the Cathedral authorities, for the uplift of the world.”
The twentieth-century niche was left empty with instructions that it was to remain empty for seventy-eight years in order to determine who would be worthy of filling the void for the century. Representing the 17th, 18th and 19th centuries are statues of William Shakespeare, George Washington and Abraham Lincoln


According to the New York Times, the front runners in 1922 were Theodore Roosevelt, Woodrow Wilson, Lloyd George, and Charles Evans Hughes. In 2001 the choir parapet was completed with the addition of a sculpture by Chris Pelletierri of a group of four figures: Martin Luther King, Albert Einstein, Susan B. Anthony and Mohandas Gandhi.